No doubt about it. Star Wars Episode VII: The Force Awakens is a worthy successor to the Star Wars legacy. It’s action-packed, including a spectacular pair of light saber duels at the end. It’s also populated with a pleasing combination of intriguing new characters and welcome old friends. 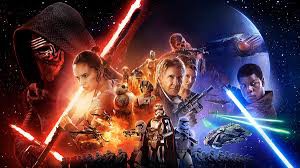 If only the story wasn’t so weak (and we can’t blame Lucas this time). Actually, in isolation from the other Star Wars movies, the story is often compelling. Even with the other films as context, it managed to sustain my interest throughout. Things could be worse.

The problem is that I kept getting irritated with how much of the plot was a copycat retread of the prior films, especially Episode IV. While I understand fans’ desire to maintain the “look and feel” of the original movies (and you can count me in this group), there’s a difference between inspiration and imitation. Star Wars Episode VII crossed that line.

• Episode VII concerns a small band of good guys (the Rebellion) battling an evil force (the First Order). As the film opens, the First Order appears to be in control of the galaxy.

Episode IV opened almost the same way, except it was the Empire instead of the First Order. The poor Rebellion seems clueless about how to take over and run a galaxy. It’s only 30 years after they destroyed the Empire, and they are already back on the defensive.

• Episode VII opens with a cute droid (BB-8) being given a secret document to be delivered to allies elsewhere.

Episode IV opens the same way —with R2D2 the recipient.

• Episode VII opens with a young adult (Rey), who lives on a desert planet, acquiring the droid and committing to help the droid complete its mission.

Episode IV opens the same way — except Luke is the youngster on the desert planet.

• Episode VII features a major villain (Kylo Ren) who dresses in an all black outfit and wears a hard-shell hooded mask.

I needn’t remind you that, in Episode IV, this precisely describes Darth Vader. I suppose the filmmakers would argue that this is deliberate, that Ren is attempting to emulate Vader (Ren does not actually require the mask to survive). But it’s still another copycat plot point.

• In Episode VII, Ren has a master who is even more powerful and evil (Supreme Leader Snoke).

In Episodes V and VI, the same relationship exists between Vader and the Emperor.

• One of Episode VII’s biggest reveals is that Ren is actually Ben Solo, the son of Han Solo and Leia. He was training to be a Jedi, but was turned to the dark side.

This is a twisted echo of a similar generational reveal: Luke is Vader’s son. Vader was also a Jedi who was turned to the dark side.

• In Episode VII, Rey starts out largely naive as what’s going on in the galaxy — but eventually becomes a key player as she becomes aware that she possesses the power of the Force.

If this sounds similar to what happens to Luke in Episode IV, that’s because it is exactly the same.

• Episode VII concludes with a light saber duel between the two main protagonists (Rey and Ren). It ends with Ren surviving to fight another day.

Episode V ends with a similar fight between Vader and Luke, with Vader surviving to fight another day.

• Finally (although I am sure I have overlooked other similarities), Episode VII features a “death star” — and the only way to destroy it is via a well-placed shot by a fighter ship.

This is the identical scenario at the end of both Episodes IV and VI (and even Episode I to a some extent). I mean, come on! Isn’t there some other dramatic device the screenwriters could imagine besides a death star? Apparently not. I can only hope that this is the last death star we will have to endure.

The Force Awakens won’t win any awards for originality. Indeed, it too often seems as if there is only one Star Wars plot — and it keeps getting recycled. But it is a well-executed recycling. And I will be back in two years, eagerly awaiting to see what happens with the return of Luke Skywalker. With some luck, what happens won’t be a repeat of what has already happened in earlier Star Wars movies.

This entry was posted in Entertainment, Movies. Bookmark the permalink.