My day as an extra in the Steve Jobs movie

Back last March, I had the opportunity to attend the event where Steve Jobs announced the iMac to the world. What a fantastic day!

OK. I’ve created a bit of a reality distortion field here. What really happened is that I was an extra in the new Steve Jobs movie, starring Michael Fassbender as Jobs and with a screenplay by Aaron Sorkin.

As you probably know by now, the movie focuses on three key media events: the announcements of the original Mac, the NeXT computer and the iMac. The recreations of all the events were done in venues around the San Francisco Bay area, although not necessarily where the events originally took place.

For the final event (the introduction of the iMac in 1998), the filming took place on March 29 at Davies Symphony Hall in San Francisco. The Hall holds several thousand people and the filmmakers wanted it completely full. This was, by far, the largest of the three media event settings. They put out a call for volunteers to be extras. I probably would never have known about this if it wasn’t for someone I follow on Twitter posting a link to the signup webpage. Given that I live only a short BART ride away from the Hall, it seemed too good to pass up. I signed up.

A few days later, I received an email confirming that I had been selected. I suspect that almost everyone who applied was accepted, given the large number of extras they needed. Regardless, I was in! 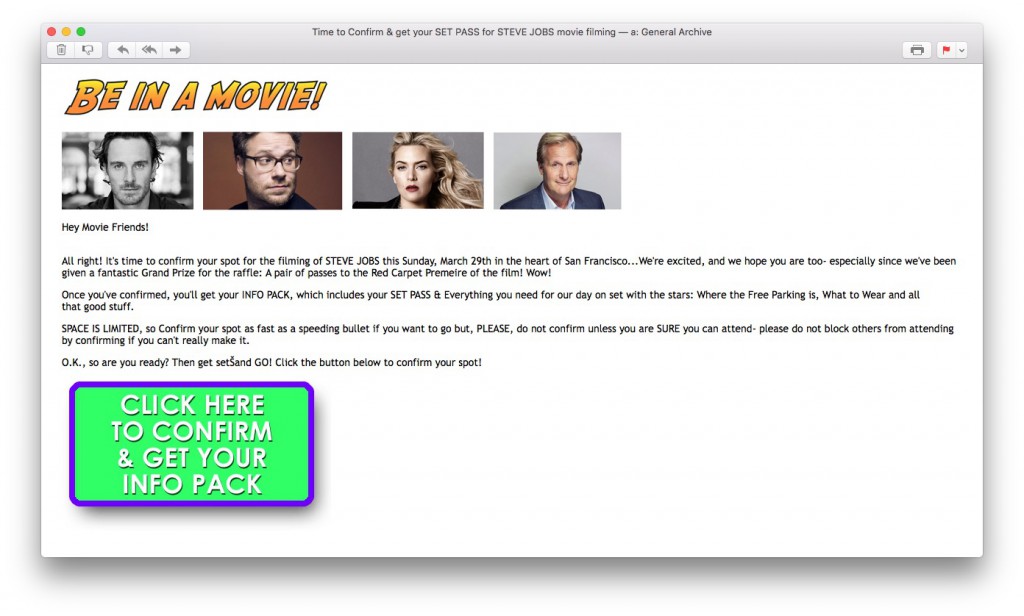 On the day of the filming, I arrived about 30 minutes prior to the time stated in the invitation. To my dismay, there was already a line stretching more than six (6) blocks, waiting to enter the Hall. And more kept coming. In fact, because parking near the Hall is so limited, the studio had set up shuttle buses from a distant parking lot. Around a dozen full size buses unloaded while I was waiting.

By this time, I was thinking that, in an attempt to be certain of filling the Hall, the filmmakers had oversold the acceptances — meaning that some of us would be sent home without ever getting inside. I was wrong. Everyone got in. 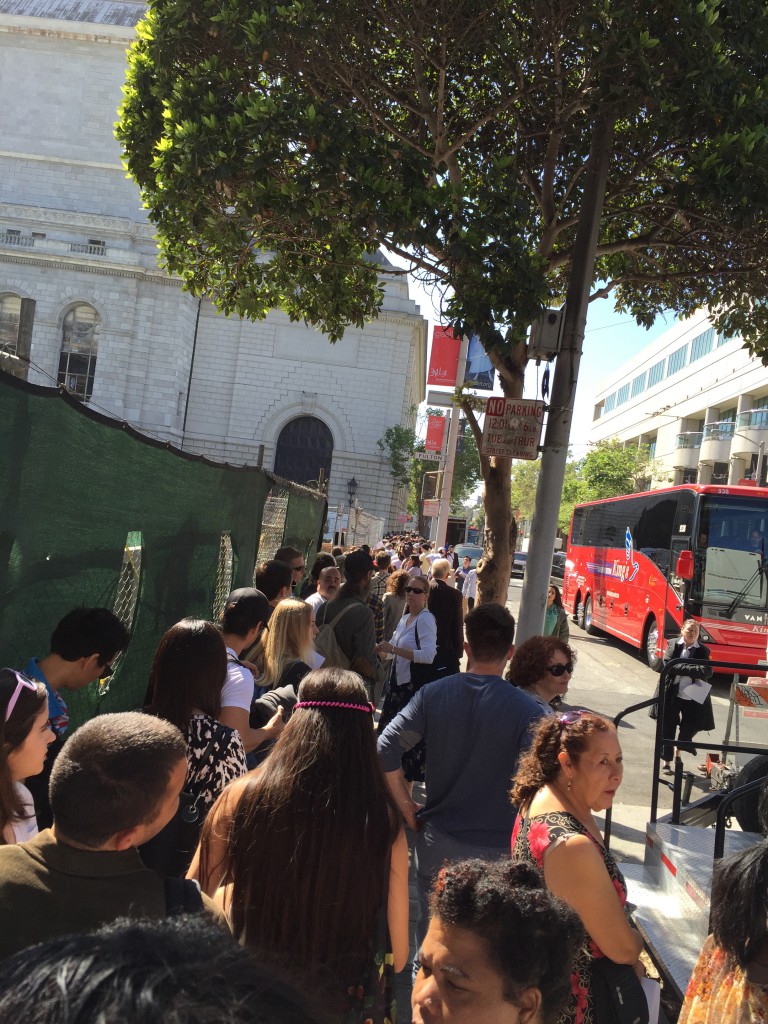 Eventually, the line began to move. By the time I got to the front of the line, it was well over an hour from when I first arrived. I signed the required release forms and was ushered into the Hall. It was still only about half full. Over the next hour, the Hall eventually reached capacity. 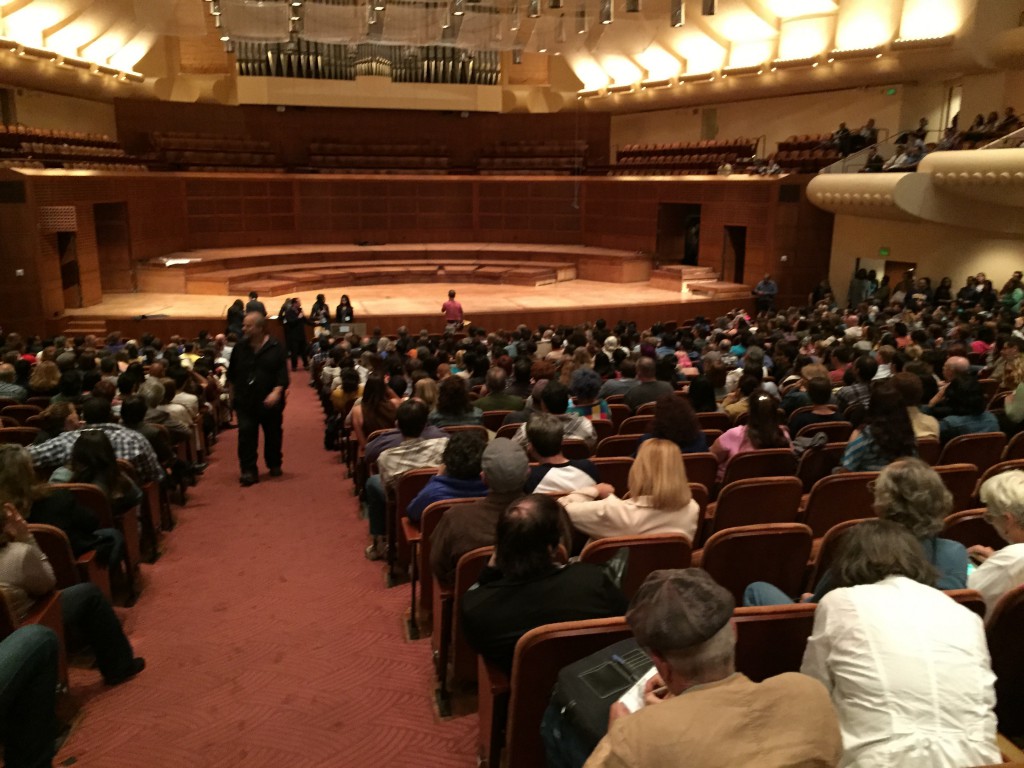 A small group of “professional” extras were seated in the first few rows on the left. As it turned out, this was where Jeff Daniels (as John Sculley) would later be filmed. The rest of the Hall was filled with volunteers such as myself.

Where possible, the filmmakers tried to recreate the “look and feel” of the original event, including having replicas (originals?) of  banners hanging from the ceiling out in the hallway. Quite impressive. 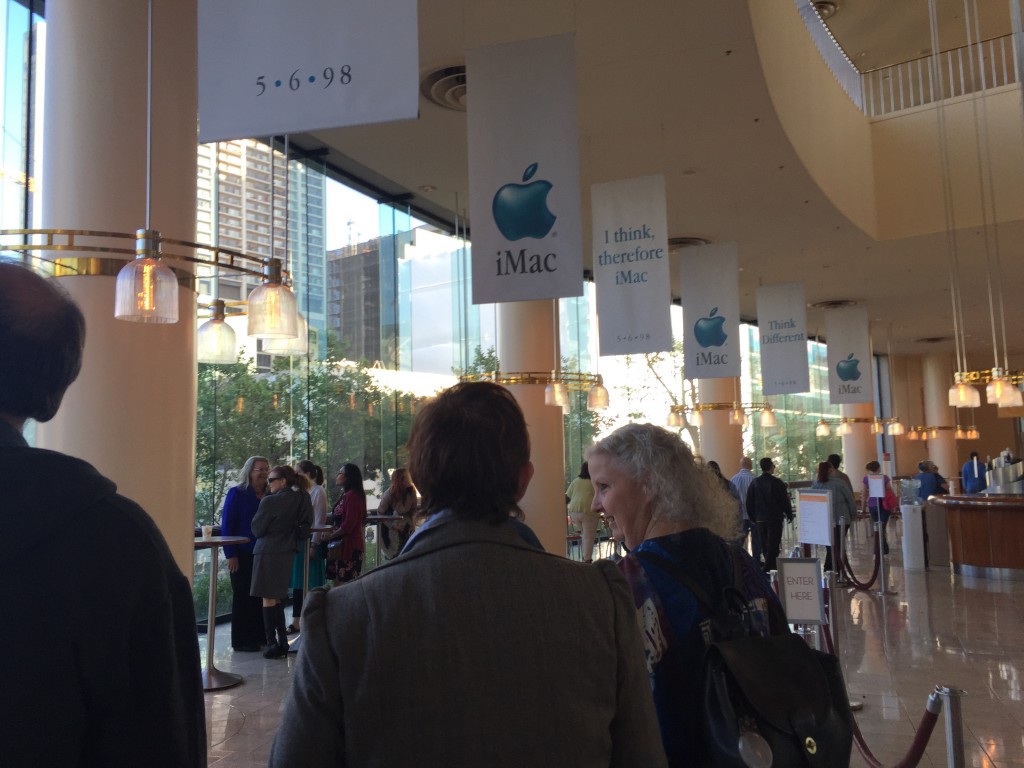 Once we were all seated, various sound and lighting checks were conducted. Eventually, Danny Boyle and his assistant director came out and introduced themselves. They gave us details about what would be filmed and what we were expected to do. Essentially, there would be various audience scenes showing us anticipating Steve Jobs’ entrance on to the stage (including one sequence where we were to stamp our feet to make noise) and cheering him when he was finally introduced.

Initially, we rehearsed with a stand-in for Michael Fassbender. Interestingly, the stand-in looked much more like Steve Jobs than Fassbender does. A few people near me mistakenly initially assumed that he was Fassbender.

Eventually, Fassbender came out and we began filming for real. The main scene was where an announcer said something like: “Ladies and gentlemen….Steve Jobs.” At this point, Fassbender strides on to the stage and we all stand up and cheer wildly. The flashing of   camera lightbulbs was simulated by a variety of strobe lights situated around the hall, triggered to go off at just the right moment. It was quite effective. When the cheering died down, I believe Fassbender said “Thank you.” That was it. The director yelled “Cut”…end of scene.

I assume, in the final film, it’s fade out to credits after this scene. In any case, when it was all over, Boyle informed us that this was the final day of filming. After this, it was “a wrap.”

There was no CGI involved. What you see in the film really are thousands of people standing up and cheering.

A few other related scenes were filmed that day. There was the Jeff Daniels scene. Another one took place backstage (I couldn’t see what was going on from where my seat was located, but I heard it involved Steve’s daughter Lisa). Yet another one was the arrival of Steve Wozniak (played by Seth Rogen). As luck would have it, this took place just a few rows from my seat. If it turns out that I am actually detectable on screen in the final cut of the movie, it will most likely be at this point.

There was a lot of waiting in between filming of each scene. At these points, you could out to the hallway and get snacks. 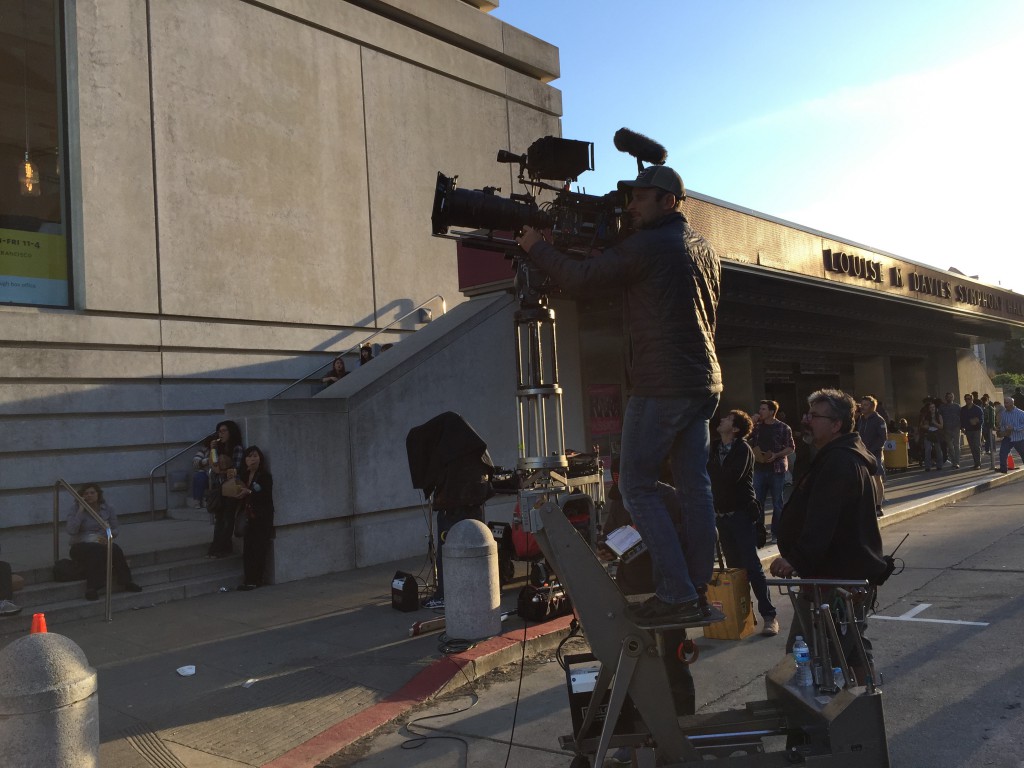 Filming a scene outside

Finally, we were shuttled outside of the building in order to film a crowd shot. After that, we went back inside the Hall, where they raffled off a few prizes and provided us with a box lunch. By this time, it was around 6:00, a little late for lunch. But heck, it was free. It had been about eight hours since my arrival.

And that was it. The big day was over.

I haven’t seen the movie yet. But it appears that the Davies audience scene is a significant one. Glimpses of it are in every trailer. I haven’t tried freeze-framing to see if I can spot myself. I’m guessing no, but I’ll wait until after I see the movie to confirm.

Or maybe I’ll never bother to check. Ultimately, it doesn’t matter to me whether I am on camera or not. I had a great time that day. I couldn’t be at the original iMac event. This was definitely the the next best thing. A day to remember. Both in 1998 and in 2015.

This entry was posted in Apple Inc, Entertainment, Movies. Bookmark the permalink.