Who are the strangers? Not Trump supporters

Trump supporters would have you believe they are the most aggrieved party in the country right now.

As covered in “Strangers in Their Own Land” (a recent book by Arlie Hochschild that is in many ways a sequel to “What’s the Matter With Kansas”), these feelings of resentment can lead voters to support political candidates and positions that are clearly against their economic self-interest.

In searching for a resolution to this seeming paradox, the author focuses on the feelings of disenfranchisement of Trump supporters in Louisiana…the sense that the country no longer works for them or cares about them. Despite working hard, they feel passed over — as various minority groups cut in line ahead of them. These folk feel especially aggrieved by the “liberal elites,” who reside primarily on the coasts and who, so they claim, look down on them and consider them to be “ignorant bumpkins.” In response, they support candidates such as Trump who appear to “get” them culturally.

Up to a point, I can be empathetic. But, in light of what has happened these past months, another part of me wants to scream: “What the hell are you talking about?” To see why, let’s twist the prism a bit and look again:

To start with, as seen in countless television interviews, Trump voters typically express at least equal, more often greater, contempt for the “libtards” they disdain…than the liberals have ever expressed towards them. Indeed, it often seems that the primary political agenda of these right-wingers is to oppose whatever it is that liberals want. “If liberals are upset, we must be doing something right” is their credo. The specifics of the issue hardly matter. And so they maintain their support for Trump because, no matter what else he is doing (even if it ultimately hurts his supporters), he is pissing off liberals. It’s hard to maintain empathy for such a position.

More importantly, let’s be clear about who’s actually in control of this country.

Of the 50 state governors, 34 are Republican. Republicans now control a record 68% of state legislative chambers. Together, this has allowed state governments to gerrymander election districts, pass voter suppression legislation — and carry out other similar actions — all designed to prevent political opposition from having a fair chance at winning upcoming elections.

At the national level, the U.S House of Representatives and the Senate are both controlled by Republicans…including a significant segment that represents the extreme right wing of the party. And, of course, our President is Republican. This is a rare trifecta of one-party control.

Since taking office, via executive orders and administrative appointments, Trump has tried to undo virtually everything Obama accomplished and pretty much everything progressives support (from Internet neutrality to consumer protections to immigration reform to support for international treaties to preservation of national monuments to sabotaging Obamacare — and on and on). And he is succeeding.

Look at the map below (taken from Time). Does this look like a country dominated by liberals? Certainly not from a geographic perspective. Demographic studies predict that, in a few years, 70% of our population will be concentrated in just 15 states. Put another way, 70% of our Senators will come from a 30% minority of our country, most of whom are Republican. 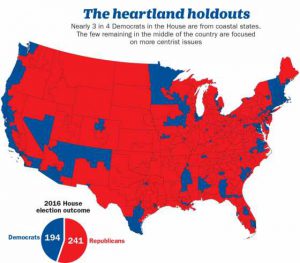 And thanks to Neil Gorsuch, Trump’s Supreme Court appointee, there remains a conservative majority on the Court…one that looks to be maintained for at least a generation. If Trump manages to stay in office long enough for another justice to exit, the size of the majority may grow — and the rest of the Federal courts will similarly shift dramatically in a conservative direction as he fills vacancies.

Meanwhile, in the media realm, the Sinclair Broadcast Group is a strongly conservative company that currently dominates radio station ownership. Fox News, a strongly right-wing slanted television station, is the most popular of all cable news stations.

Even the Russians have thrown their support to Trump, using computer hacking and other illegal means, to hurt Trump’s opposition.

Finally, these supposed “strangers in their own land” lament that their Christianity is under attack (pointing to such silly falsehoods as a prohibition against saying “Merry Christmas”). The truth is that “Christianity is the most adhered to religion in the United States, with 75% of polled American adults identifying themselves as Christian.” As a Jew and an atheist, it’s hard for me to accept that Christians are more subject to attack than the groups to which I belong — especially when we have a President that appears to give air cover to racists and bigots.

Yet…despite all of the above…Trump supporters continue to contend that they are the most aggrieved, persecuted and underrepresented group in this country. Don’t believe it. Yes, the demographics and economics of the country are changing…and some people are facing more hardships than others as a result. This is a recurring problem — and we need to work to solve it. However, there are plenty of underrepresented aggrieved people who are not white male working class conservative Christians living in the middle of the country. The solution is not for Trump supporters to “take their country back.” The country was never “theirs” to take back.

Essentially, if Trump supporters don’t like the way the country is being run, they can’t blame Democrats or liberals or Jews or African-Americans or immigrants or atheists. Wake up and look around at who’s actually running this country. No, you are not the strangers in your own land. Increasingly, it’s the rest of us who are.

This entry was posted in Media, Politics. Bookmark the permalink.