This is why iOS 8 is such a big deal

iOS 8 is the most important, most game-changing update to iOS since…well, since the arrival of the App Store in 2008.

I don’t say this because of all new features in iOS 8. There are many new features…so many that I’m still discovering some of the lesser known ones.

I don’t say this because of how nicely iOS 8 smooths out the rough edges of previous iOS versions. To take one example, you can now answer messages while staying in your current app rather than having to switch to the Messages app. This is all true, but that’s not the most critical change.

It’s not even the Handoff feature, which allows you to start a document on one device and automatically pick it up in progress on any other of your devices, OS X or iOS. Impressive as it is, it’s not the biggest deal.

The biggest deal is the greatly expanded “openness” in iOS 8. It’s as if iOS had been living in a shuttered room with the curtains drawn — and now the windows have been thrown open and the sun is pouring in. Yes, the change to iOS is that big. And the primary benefactor behind all of this openness are iOS 8’s extensions: Actions, Custom keyboards, Document providers, Sharing, Widgets and such. Taken together, these represent a profound philosophical shift in how Apple views iOS.

Working our way back to iOS 8

I’ve been writing about iOS since I wrote a book about it back in 2007. I marveled at the iPhone back then and continue to do so. At the same time, I’ve never stopped lamenting about the limitations of iOS, limitations that I believed Apple could easily address if it chose to do so. It has at last chosen to do so.

Although iOS is essentially a variation of the Mac’s OS X, Apple has never provided any of the Mac-like access to the iOS file system. There is no Finder in iOS, no way to see the files and folders that exist.  There has been no way to manipulate where you stored the documents you created. There are similarly no iOS apps that can directly access the file system, apps such as Terminal.

There have been only limited ways to share files between Macs and iOS devices. There has been no seamless way for two iOS apps to work on the same document. In fact, due to sandboxing, an iOS app typically is not even aware of the existence of documents created in other apps.

Similarly, there have been only very limited ways that one app can work within another app. There have been no system-wide utilities, such as exist in OS X.

Also recall that when the iPhone was first released, Steve Jobs was opposed any sort of third-party App Store. All third-party software was to work as web apps. Even after he was convinced to change his mind here, the “curated” App Store remained the only way to get apps on your iPhone (unless you chose to jailbreak your device).

And on and on. You get the idea.

Each new update to iOS brought the promise that things would get better. And while each release did move the ball a bit further down the field, Apple still was quite a distance from the end zone. Until now. Until iOS 8. It changes everything. Well, almost everything. Certainly more than enough to get excited about.

To give you a small taste of what I mean, here are three key examples:

TextExpander. TextExpander on a Mac is a great utility…allowing you to type keyboard shortcuts that instantly expand to longer text or even graphics. There’s also an iOS version, but it has not been nearly as useful. Why? Because, due to iOS sandboxing, TextExpander could not function in most apps. Third-party apps had to specifically add in support for TextExpander. Most did not. And even if they did, it did not always work as promised.

This problem is now gone…vanished…over. The latest version of TextExpander touch for iOS 8 includes a TextExpander custom keyboard. With the keyboard active, TextExpander shortcuts work in any app that has access to the iOS keyboard. Fantastic!

[Note: How do you set this up? Briefly, after installing the TextExpander app, go to Settings > General > Keyboard > Keyboards. From here, select Add New Keyboard. Once you’ve added, the TextExpander keyboard, you activate it from the Globe icon/key on the iOS keyboard in any app.] 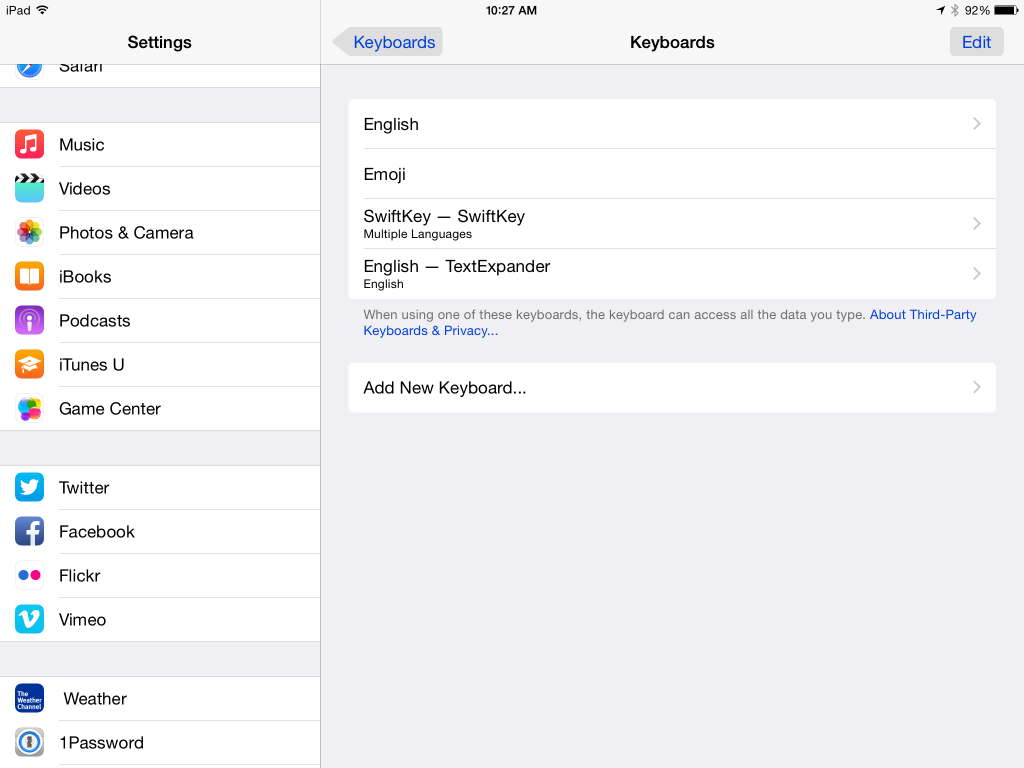 Adding custom keyboards, such as SwiftKey and TextExpander

1Password. The 1Password app is another superb OS X utility that has had trouble making the transition to iOS. With 1Password, you can save all of your passwords in a single location. To use any of them, all you need to remember is the single password for 1Password. The most frequent destination app for 1Password is a web browser, due to all the Internet accounts that require names and passwords to log in.

In iOS, “web browser” typically means Mobile Safari. Unfortunately, prior to iOS 8, there was no way for 1Password to work in Mobile Safari. To work-around this, AgileBits built a web browser into the 1Password app. In other words, using 1Password regularly could mean giving up on Safari, something most users did not want to do.

With iOS 8, the dilemma has been resolved. You can now enable the 1Password action extension in Safari (as well as other apps). Once it’s up and running, 1Password appears as a sort of mini-app within Safari.

[Note: To get this working in Safari, after installing the 1Password app, go to Safari and tap the Sharing item. From here, swipe the bottom row to get the More button to appear. Tap More. Scroll down to locate the 1Password item and move the slider to turn it on. Tap Done and you are ready to roll. Return to the same bottom row of Sharing. There will now be a 1Password item. Tap it and the 1Password login window will appear!] 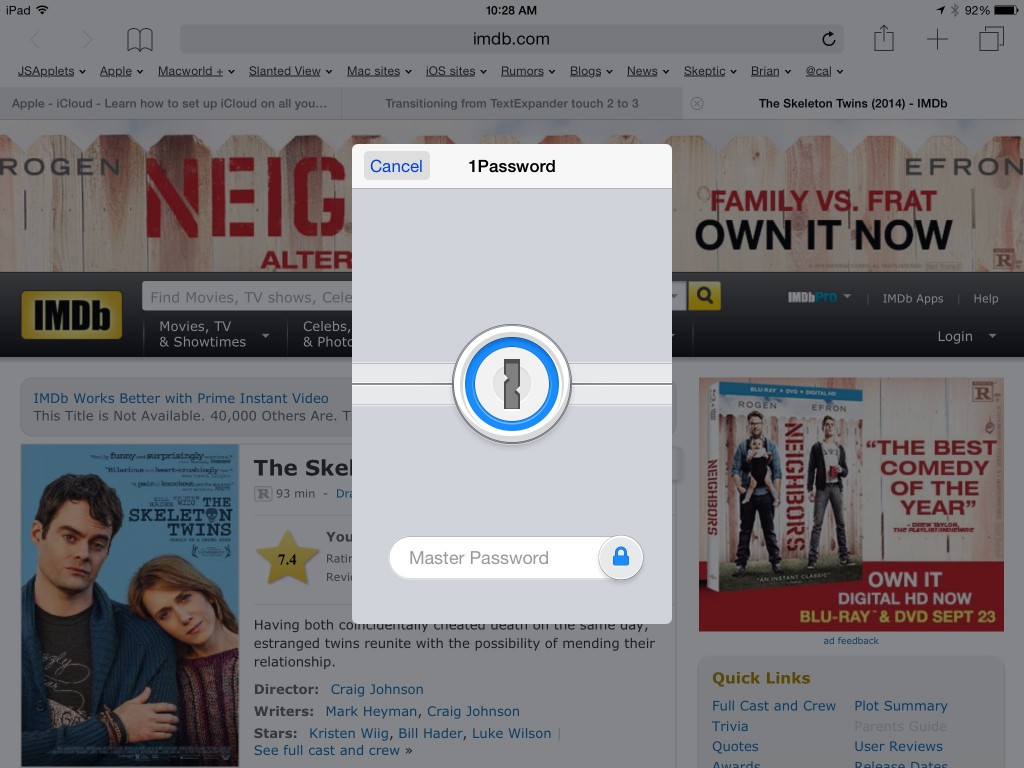 The 1Password extension, as seen in Safari on an iPad

Document Picker. I’ve saved the best for last. File sharing has always been one of the weakest links in iOS. At first, it was almost unusable. It’s gotten better, but even with iOS 7’s Documents in the Cloud, much was left to be desired. As one example, if you saved a TextEdit or Preview document to iCloud on your Mac, there was no way to access the document on your iOS devices — because iOS 7 apps could only open documents created by the matching app on a Mac — and there was no matching iOS versions of TextEdit or Preview.

Again, all of this has changed for the better in iOS 8. Because OS X 10.10 Yosemite has not yet been released, not all of the cross-platform features of Document Picker are available yet. And very few iOS apps have been updated to take advantage of the option as yet. As a result, I still have several questions about how all of this works. But here is what I do know:

Document sharing, and what options are available, can vary from app to app. Following a tip from an excellent article by Federico Viticco, I tested the Document Picker in the updated Scanner Pro and Dropbox apps.

[Note: To find the Document Picker in Scanner Pro on a iPad (it works a bit differently on an iPhone), navigate to Sharing > More > iCloud Export. The iCloud Drive export window appears. You can save documents to any of the listed locations. Apple has never supported anything close to this before.] 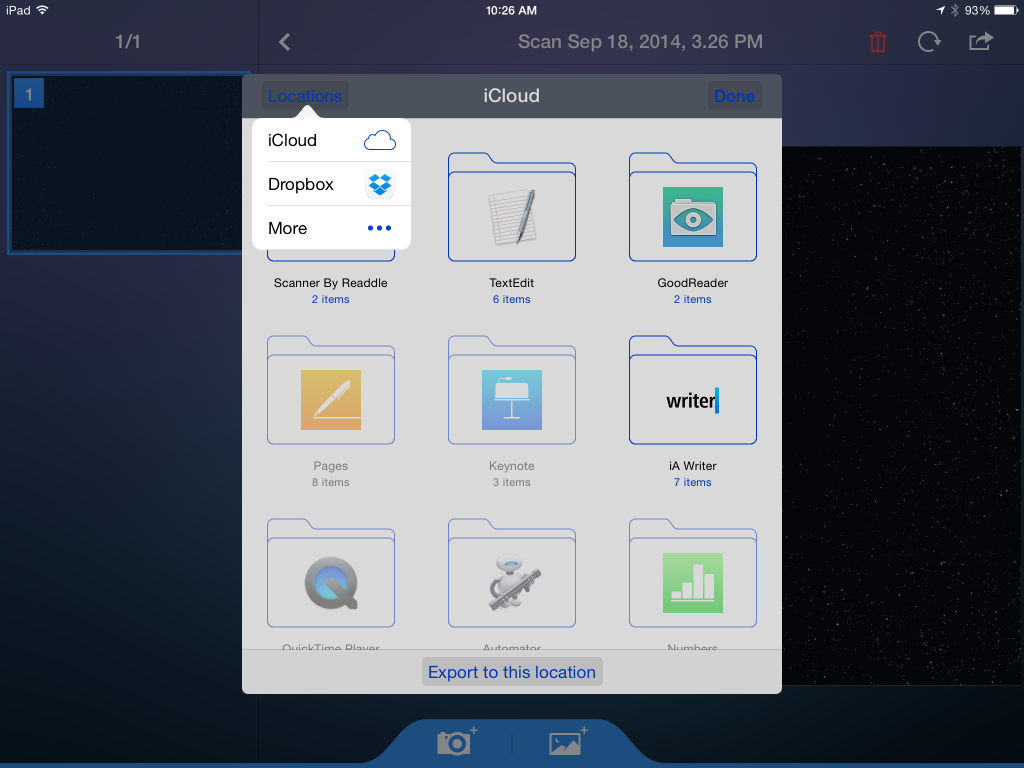 The iCloud Export screen from Scanner Pro, with the Locations menu visible

A similar iCloud Drive import window in another app will allow users to open documents stored in iCloud drive — as long as the app is compatible with the document type and has been updated to support the feature. Different apps will be able to view and edit the same document, not just a copy, allowing changes made in one app to be reflected in the other.

This will work with documents shared between the Mac and iOS devices as well as among iOS apps. Yes, this means documents created in TextEdit or Preview on a Mac will finally be openable by iOS apps!

I was hoping to test all of this out with Apple’s iWork apps (Pages, Numbers, Keynote). Unfortunately, the iOS versions of these apps, while they support iCloud storage (as they did in iOS 7), they do not yet provide access to iCloud Drive and the Document Picker. Perhaps that will come after Yosemite is released. Or perhaps not. As far as I know, Apple has not commented on this.

Back at Scanner Pro’s iCloud Export screen, you can see a Location button in the upper left corner. Tap it to bring up a list of other export locations besides iCloud Drive. If no other items appear, tap the More button to see what choices you have.

On my iPad, I can choose Dropbox. This gives me the option to export/save a document to any location in Dropbox. As this is a system-wide feature, it means that any app that includes support for the Document Picker can automatically have Dropbox access. No longer will developers have to separately add Dropbox support to their apps.

Apple (and app developers) still need to do some interface cleanup. For one thing, it’s a bit of a misnomer to select Dropbox from a screen labeled iCloud. Overall, there are too many different variations and circuitous paths involved in the iCloud options. It needs greater simplicity and consistency. And some bug fixes. I’m optimistic this will all get better as time goes on (although we may have to wait for iOS 9 for really big improvements).

Regardless, this is a huge shift for Apple. True, iOS 8 doesn’t have all the file access available on a Mac (there’s still no Terminal app in the App Store, for example). And it probably never will; it’s not Apple’s goal to do so. Apple sees the needs and wants for iOS devices differently than for Macs. But iOS 8 provides users and third-party developers with a new level of openness and inter-app communication that is a quantum leap beyond what existed before. It addresses all of the most pressing concerns. This is what makes iOS 8 such a big deal.

I believe this change in direction is a deliberate move that can be traced back directly to Tim Cook. For me, that’s why, even more so than the forthcoming Apple Watch, this is the clearest evidence that it’s really Tim Cook’s Apple now.