In a recent column for Macworld, I opined that the time was nearly perfect for Apple to make some bold announcements at the opening keynote of this year’s WWDC. Guess what? Apple delivered. In spades.

For years, I’ve been waiting to see what Apple was going to do with the Mac Pro. It’s still hard to believe that the current Mac Pro doesn’t have support for Thunderbolt or USB 3. It’s been that long since Apple gave it a major upgrade.

Would Apple abandon the Pro (as I speculated back in 2009)? Or reinvent it? It turns out, Apple sort of did both. The new Mac Pro is so radically different from the old behemoth that it really belongs in a separate category. Apple did kill the old Mac Pro and it replaced the computer with something entirely different — something so different in design that it easily qualifies as the most revolutionary new product since the iPhone. As Phil Schiller put it succinctly at the keynote today: “Can’t innovate any more, my ass.” 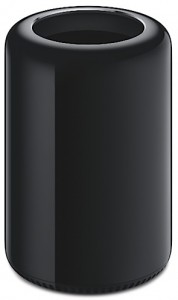 The new Mac Pro isn’t shipping yet. So we’ll have to wait awhile for any hands-on analysis. My only personal look today was to gawk at the ones on display in several glass cylinders outside the keynote hall.

Here’s what I can say for sure: Answering the prayers of all those who hoped that Apple would downsize the Pro from its current huge, heat-emitting, energy-sucking size — the new Pro is about one-eighth the size of the old model. The only potential downside here is that there is no longer any internal expansion. All additions must be external, including an optical disc drive. On the other hand, the new Mac supports a faster Thunderbolt 2 connection, which can drive up to three 4K displays. Hmmm…is a 4K Cinema Display coming later this year?

In every other way, the new Pro seems like very much…a pro machine. Specs indicate that it is at least twice as fast as existing Pro models in almost every measure. This device is already on my wish list for the fall.

In the Macworld column I cited above, I suggested several key things that Apple should do, almost needed to do, to improve iOS. A bit to my surprise, I was very much on target. Apple delivered on almost every one of these features in iOS 7. Not satisfied with that accomplishment, Apple added more than a few additional features I did not anticipate.

Will there be widgets? Almost. The new Control Center comes close. Just swipe up from the bottom and it appears. You can access Airplane mode, Bluetooth and more. There appears to be no room for third-party additions to Control Center. And no sign of calculator-type widget apps. But I’ll give Apple a pass on that for now.

Expanded multitasking? Yes! Every app can now multitask, with intelligent updating of content based on how you use the app. You now swipe through apps in a way that shows each app’s current screen — providing a far superior multitasking feel than the current bar that appears at the bottom of iOS 6. The only thing missing is the ability to have two or more apps share the screen. I guess we’ll have to wait for iOS 8 for that.

Expanded options for the Lock screen? Yes! Yes! You will be able to access Notifications and Control Center without having to unlock your iPhone or iPad.

There is so much more. Personal highlights for me were automatic categorizing in Photos, the inclusion of AirDrop (to improve sharing among Macs and iOS devices), and the brand new iTunes Radio music streaming service.

Finally, there is the complete redesign of the interface, as had been promised. Skeuomorphism is gone, leaving the OS with a much cleaner, more consistent look across apps. Changes such as the elimination of button borders, in favor of colored text to indicate what is clickable, give the OS a more open feel. Even the small touches, like wallpaper images that show a parallax tilt when you tilt the iOS device, were delightful to see.

There are a few things I would have liked that did not appear. I would have preferred to see improvements to the virtual keyboard and text editing. I would have liked a greater revamping of Game Center (including the ability to talk to other players) and numerous changes to Documents in the Cloud. Still, Apple acquitted itself nicely with what it did deliver.

I’m sure there will be a few more surprises when Apple releases updates to the iPhone and iPad this fall. But I can already say that iOS 7 lives up to Apple’s assertion that it is the most dramatically redesigned iOS since the iPhone was first released.

Bottom line: With iOS 7, Apple has begun a reinvention of iOS. Kudos.

The new version of OS X will be called Mavericks. Cat names are now part of history.

In my prior Macworld column, I pondered whether Apple might continue its iOS-ification trend, pushing changes to an extreme that few would welcome. Happily, Apple did not.

For starters, the Finder not only remains a key component of OS X Mavericks, it is significantly enhanced. [And by the way, Launchpad was not even mentioned at the keynote.] I am particularly looking forward to the Finder’s new tags feature. As a way to organize and quickly find files, tags may finally get me to use All My Files and to drift away from organizing files into folders.

Perhaps my favorite new Mavericks feature is Maps, an export of the iOS app to the Mac. What makes it especially great is that Maps syncs across platforms. Among other things, this means that, if you create a route on your Mac, the route will transfer to Maps on your iPhone. No need to do the same thing twice.

Another really big deal in Mavericks is full support of multiple displays. Finally! Most notably, when you go into full screen mode on one display, your other display(s) remain unchanged. This may be the tipping point that finally gets me to use full screen apps.

iCloud Keychain promises to provide the sort of support for remembering passwords and credit card numbers that has been thus far only possible with third-party apps. Of course, it will sync across all your devices, Macs and iOS.

Once again, this is only the tip of the iceberg. There are major redesigns of Safari and Calendar, as well as iBooks for the Mac.

Bottom line: Apple managed to thread the needle. It made significant improvements to the OS, ones that stand on their own (such as Finder tags) and ones that allow it to work better with iOS devices (such as Maps). It seems to have struck a near perfect balance, not tilting too far in either directions. Once again, kudos.

My only big disappointment today is that none of these products will be available until the fall. Mark your calendars now. I am confident they will be worth the wait.