The Punctuated Equilibrium of Macworld | iWorld 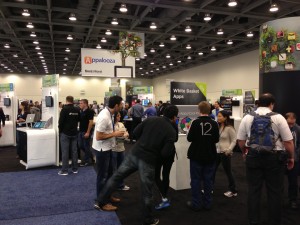 Years ago, Stephen Jay Gould put forward a new twist on how species evolved over time. Called “punctuated equilibrium,” the essential notion is that changes in species characteristics most often occur in small increments spanning long periods of time. However, on rare occasions, typically due to some major upheaval in the environment, a period of (relatively) rapid change may occur. As a species “scrambles” to adapt to the radical changes in its environment, the most frequent result is either the emergence of a new species and/or extinction of the old one.

As I ponder the evolutionary path of Macworld Expo (now Macworld | iWorld), the concept of “punctuated equilibrium” strikes me as a perfect metaphor.

From the very first Expo back in 1985 until the ones held just a few years ago, Macworld was the epitome of evolutionary stasis. Certainly, there were ups and downs. The Expo expanded (occupying all of Moscone North and South at one point) and contracted, locations moved and were sometimes eliminated altogether (see: East Coast Expos). Still, if you attended an Expo in 2008, the overall format, the “look and feel” of the show, was quite similar to what it was decades earlier. The changes were overall small in comparison to what remained the same.

All of this ended in 2009, due to a convergence of two cataclysmic events.

The first event was one that had been brewing for more than a decade but finally exploded in the mid-2000’s: the rise of the web. With companies hawking their wares on websites, they no longer saw a need to fork over the bucks for a huge trade show booth. Additionally, companies no longer timed the release of their new products to coincide with a big trade show announcement. The result: smaller shows with almost nothing truly “new” on display. This led to a contraction, and ultimately an elimination, of many trade shows (CES remains an exception to this rule). For a time, Macworld held up against this tide, thanks to the re-ascendance of Steve Jobs as CEO and, a bit later, to the popularity of Apple’s iPod. But, by the latter half of the decade, even as Apple’s stature skyrocketed with the release of the iPhone, Macworld Expo was feeling the downward drag of this “web effect.”

The second event was Apple’s departure from the Expo in 2010 (Steve Jobs last appearance was actually in 2008). This put Macworld Expo in a perilous tailspin. Almost all major vendors deserted the show floor. Attendance dropped precipitously. Almost everyone was speculating how long it would be before the Expo went “extinct” altogether.

In other words, the Expo had gone from stasis to disruption. The equilibrium had clearly “punctuated.”

Today, after 4 years of scrambling to reinvent itself, a new Macworld has emerged. It was actually first seen last year. Almost entirely abandoning the idea of Macworld as an industry trade show, it became the “ultimate iFan event,” a consumer-oriented celebration of Apple’s products — and the peripherals, software and people that support them. Recognizing the overriding importance of Apple’s mobile “i” products, Macworld Expo also changed its named, rebranding itself as Macworld | iWorld.

And it worked. The new show is smaller, with a very different feel than the ones that came before. But it is successful.

Attendance this year remained healthy (even if my rough estimate suggests it was a bit less than last year). Vendors were generally giddy with excitement at how much traffic they saw at their booths. Several vendors that I asked were all or nearly all sold out of everything they had brought to sell at the show.

The Tech Talks were as strong as ever (disclaimer: I gave one of these Tech Talks). The events on the Main Stage and in the hallways struck me as even better than in years past.

Most noteworthy, the format of this year’s Expo was an almost identical match to that of last year.

In other words, the disruptive period of Macworld Expo evolution appears to be coming to end. Instead, we are now entering a new period of stasis which (if you enjoy Macworld as much as I do) will hopefully remain for the foreseeable future.

For the past several years, hardware products have not dominated the show floor. That’s not exactly true. If you wanted to see iPhone/iPad cases or coverings of any sort, from the practical and useful (such as iPad cases with keyboards) to the silly and pretty useless (such as iPhone cases with can openers), they were there in abundance. The same was true for other i-accessories, from batteries to camera lenses. To me, the silly and nearly useless products too often outnumbered the practical and useful ones. Happily, the ratio was significantly more favorable this year. There was actually innovative hardware on the floor.

If you check out Macworld’s Best of Show awards, you’ll get a feel for what I mean. Seven out of the nine winners went to hardware products.

Among my personal favorites at the show were Kanex’s mySpot and meDrive, Seagate’s Wireless Plus drive, Hyper’s iUSBport, and Connected Data’s Transporter. All of these represent new wireless methods of storing and accessing data. This is definitely a growing trend. I’m certain this category will expand further by next year’s event. I was also glad to see the ScanSnap iX500 document scanner (a product I raved about in a review prior to the Expo).

As for software, the Appalooza section of the floor combined both iOS and Mac products. It was an eclectic collection, not really representative of the biggest and most popular products (most of whom did not have a booth). But it was still interesting and fun to browse through. I was most intrigued by several “new” entries — Cloak (a consumer-friendly VPN service), CleanMyMac 2 (an update to a cleaning app that looked good enough to actually risk using on my drive), JPEGmini (an app that appears to greatly reduce the file size of images without a loss of image quality) and two great magic apps for the iPhone from Rostami (iForce and iPredict+). I hope Appalooza is even bigger next year. Good inexpensive software is always a crowd-pleaser.