What I Learned at the Apple Store Today

I was at the Grand Opening of the new Apple Store on 4th Street in Berkeley today. Hard to believe that, until now, the city of Berkeley (with one of the biggest and most renowned universities in the world) has been without an Apple Store. At last, this oversight has been corrected. 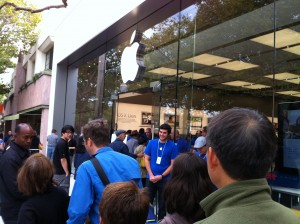 There was an impressively long line outside the Store by its 10:00 AM opening. Several hundred people by my estimate. The line had dissipated by around 11:15, but there were still t-shirts remaining to be given away when I left at 11:30.

I didn’t buy anything. But, while inside the Store, I did learn two intriguing nuggets of information:

The reason for this limitation is that Recovery HD, before allowing you to reinstall Lion, checks with Apple’s servers to verify your computer’s eligibility. Unless you purchased Lion from the Mac App Store, the verification will fail.

What if you want both an Internet-free Install Lion thumb drive and the ability to use Recovery HD to reinstall Lion? Apple’s “official” solution is to purchase Lion from the Mac App Store ($29) and buy a Lion USB Thumb Drive. This will cost you $69 + $29 = $98.

But there is a far cheaper solution. Buy the Mac App Store version of Lion and make your own 5GB or larger USB Install Lion thumb drive, using a simple procedure detailed on numerous web pages (such as this Macworld article by Dan Frakes). Assuming your thumb drive costs $10, your final cost is $39 — saving you $59 over Apple’s official route.

Are these two approaches really identical? That is, is there anything you get by buying Apple’s Lion USB Thumb Drive that you miss by going the do-it-yourself route? Nope.

I asked an Apple Genius at the 4th Street Store about this specific question. His reply: “That’s an interesting way of looking at it. And you’re right. They are the same.” I had assumed this was the case and others I had asked confirmed my assumption. Now I had an Apple Genius confirming it.

So…if you want a Lion USB thumb drive…make one yourself from the Mac App Store download of Lion. Not only will you save money, you’ll bypass the limitation on using Recovery HD. The Apple Store Genius didn’t exactly make this recommendation. But it’s surely what he implied. [By the way, the Berkeley Store didn’t have any of the drives in stock, even if I had wanted one.]

How to disable the iPad Home button. This was my first time in an Apple Store since Apple began placing iPads next to each Mac (as well as other products) on the Store’s tables. These iPads display the basic specs of each adjacent product. You can tap buttons along the bottom of the screen to get further information about the product or even request a sales associate to come over and assist you. Very slick. It’s obviously a lot more expensive than having a paper spec sheet next to the products (as used to be the case), but heck Apple has the cash to afford this. 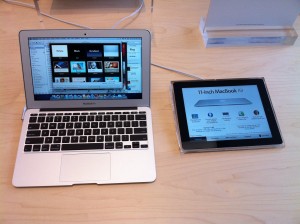 Interestingly, what you can’t do is get to the Home screen by pressing the Home button on these iPads. The function has been disabled. This makes sense. Apple wouldn’t want customers to be able to exit the display, so the iPad is placed in a “kiosk mode.” The question is: How did Apple do this?

I asked an Apple employee if I could enable this kiosk mode on my own iPad and, if so, how would I do it? He replied that it was indeed possible but “If I told you how to do it, I would have to kill you.” He was smiling when he said it, but that’s really what he said.

So I didn’t actually learn how to do this trick at the Apple Store. But my visit did start me on the path to learn how. As it turns out, you needn’t put your life in danger to accomplish this goal. However, you will need to jailbreak your iPad — and install IncarcerApp (as covered here). I’ve tried the app and it works exactly as advertised. To activate and deactivate the lock feature, you use the Volume Up/Volume Down buttons.

In the Apple Store, the iPads were encased in plexiglass which (as I recall) prevented access to the Volume buttons. So I imagine the Apple Store iPads work in the same or similar way. Still, I assume Apple has their own (non-jailbreak) way of accomplishing the lock. But (as the Store employee said) they’re not revealing what it is. Too bad. I bet many iPad owners would find a use for this feature if Apple officially offered it.

This entry was posted in Apple Inc, iOS, Mac, Technology. Bookmark the permalink.

2 Responses to What I Learned at the Apple Store Today